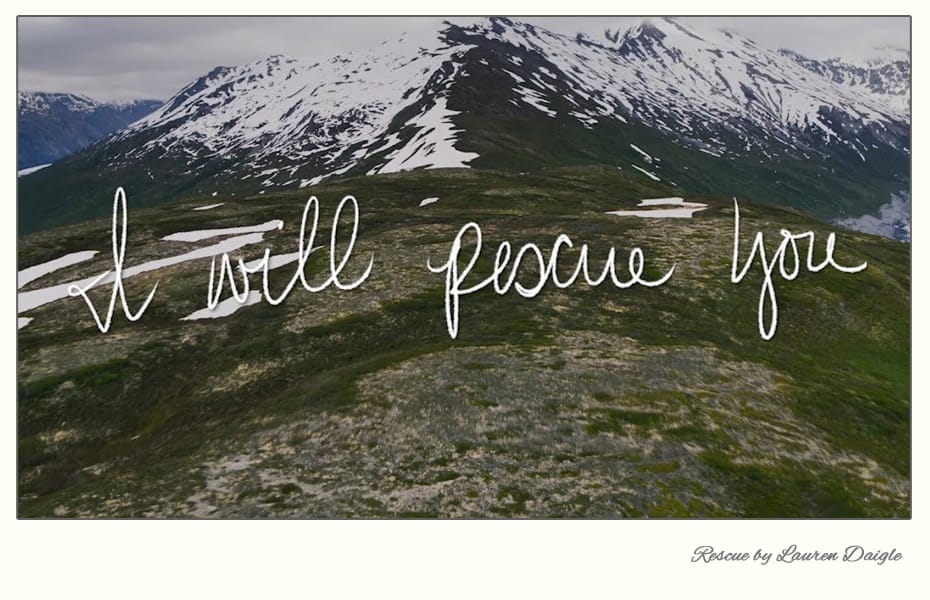 Have you ever heard a song that just moved you to tears? That’s what happened to me with Rescue by Lauren Daigle. During the fall of last year I found myself in an all too familiar state – my depression was hitting me hard. At that time Lauren Daigle was promoting her newly released video for the song. I was already familiar with that song, however, coming across it again that time around had an impact on me in a way I wasn’t expecting. I don’t think I realized how heavy my emotions were weighing on me. Hearing that first line was like a release, and the tears just started pouring out.

Forgotten. Hopeless. That’s what depression does. Depression makes you feel things so deep and heavy.  Feeling very low, lost, uncertain, completely hopeless, and impossible to see a way out. Yet hearing those lines was like a light in the darkness. As if God himself was reminding me, “You are not hidden, you are not forgotten, you are not hopeless,”

God is so great that HE can use anything, such as the right song at the right moment to reach us. As I listened to the rest of the song, the chorus gave me a beautiful visual of just how God can rescue us.

“I hear you whisper underneath your breath
I hear your SOS, your SOS

I will send out an army to find you
In the middle of the darkest night
It’s true, I will rescue you”

This in turn made the enemy king very upset. He called for his officers and questioned “which of you is the traitor? Who has been informing the king of Israel my plans?” (verse 11)

One of the officers replied, “It’s not us, the prophet Elisha tells the king of Israel everything you say…” (verse 12) Then the enemy king commanded his troops to “Go and find out where [Elisha] is, so I can send troops to seize him.” And the report came back: “Elisha is at Dothan.” One night the enemy king sent a great army with many chariots and horses to surround the city.

When Elisha’s servant got up early the next morning and went outside, there were troops, horses, and chariots everywhere. “Oh, sir, what will we do now?” the young man cried to Elisha.

“Don’t be afraid!” Elisha told him. “For there are more on our side than on theirs!” Then Elisha prayed, “O Lord, open his eyes and let him see!” The Lord opened the young man’s eyes, and when he looked up, he saw that the hillside around Elisha was filled with horses and chariots of fire. (verses 14-17).

God rescued Elisha that day from the enemy king’s army.

Oftentimes we may feel like Elisha’s servant, after seeing all “the troops, horses, and chariots everywhere.” We see all the things against us – trials, difficulties, anxiety, depression… and we are overwhelmed with fear.

What we don’t often see is that in the midst of those things –  God’s great army surrounds us. Even though the enemy wants to attack us, and keep us in a place of fear, uncertainty, and hopelessness, Elisha reminds us – “There are more on our side than on theirs!” God is always there – ready and willing to rescue us.

If you find yourself in a similar situation – feeling lost, forgotten, or hopeless, remember these words; You are not hidden, you are not forgotten, you are not hopeless. Even in your silent cries or whispers God hears your call and will send his army to come to rescue you.

Let God fight for you!

You can listen to the song here